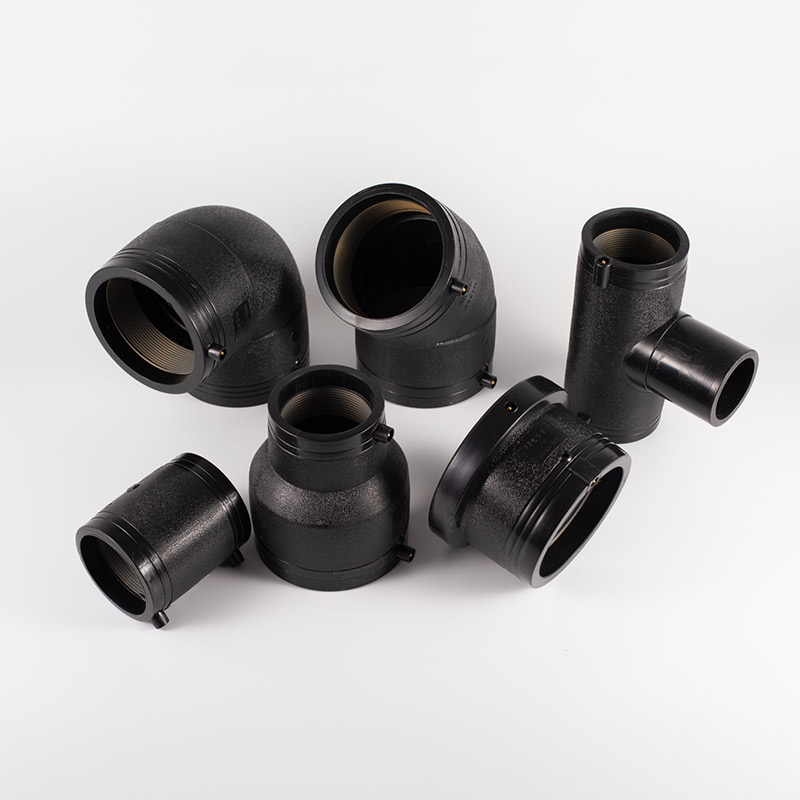 The electric fusion pipe fitting is a plastic (polyethylene) pipe fitting that can be fused to connect by the temperature generated by the electric current.Capacity (Amperes) is the main parameter, in some low-voltage circuits, the voltage requirements are not high, only the number of Amperes can be marked.


Send email to us

PE(polyethylene) is a series of varieties of resin that can be produced by a variety of processes, with a variety of structures and properties and a variety of uses. It has accounted for one third of the world's synthetic resin output, ranking first.The use of PE pipes began in the 1940s, initially as conduits for telephone lines and mine drainage without pressure (low-density PE pipes).In the mid 1950s, PE tubes were used for water supply (high density PE tubes).In the middle of 1960s, PE pipes were used for natural gas transmission and distribution (medium and high density PE pipes were used).At present, PE pipe system has become after PVC-U pipe, the world's second largest consumption of plastic pipe varieties.Widely used in gas transportation, water supply, sewage, agricultural irrigation, oil fields, mines, chemical industry and post and telecommunications and other fields.

At the same time, because the matrix of the fused pipe fittings is PE material, the PE pipe system composed of PE pipe solves two major problems of the traditional pipe: corrosion and joint leakage.Its advantages are mainly reflected as follows :(1) corrosion resistance: long service life;(2) No leakage at the joint: the use of electric fusion pipe fittings connection, essentially ensure the interface material and structure of PE pipe system and the identity of the pipe body itself, to achieve the integration of joint and pipe;(3) It can effectively resist underground movement and end load: after the PE pipe system is connected by welding method, the joint based on this method is resistant to end load, and no joint leakage will occur.At the same time, the stress relaxation properties of PE effectively dissipate stress through deformation, thus eliminating the need for costly anchoring at joints and bends in most cases.In addition, due to its high toughness and elongation at break generally exceeding 500%, PE pipeline system has a very strong adaptability to uneven settlement of pipe foundation.

Installation and Use Steps

1. Vertically cut the pipe and insert the socket into the pipe position of the electric fusion pipe fitting to remove the oxide layer on the surface with a scraper.

2. Make marking lines on the surface of the pipe with a marker pen according to the socket depth of the fused pipe fitting.

4. The pipe and pipe fittings are fixed by the fixture to prevent dislocation and loosening in the welding process

1. Pollution of organic matter and other substances is strictly prohibited in the inner wall of the electric fusion pipe fittings and the welding area of the pipe material during installation.

2. When welding pipe fittings, it must be kept away from the welded pipe fittings until the welding is completed for 30S after cooling.

3. Vary according to the temperature and working voltage of the field environment.The welding time can be properly compensated during welding.

5. During pipe installation, elbow and tee pipe fittings must be strengthened by supporting piers or fixed by brackets and properly compensated by pipes.

6. The pipe material must be buried under the permafrost, and there should be no water to soak the pipe in the pipe trench during installation and welding.

7. When the temperature is low, heat preservation work must be done for welding electric fusion pipe fittings.

8. When working in an environment with large temperature difference between day and night, centralizers and other tools must be used to fix the pipes on both sides of the electric fusion pipe fittings to avoid the impact of thermal expansion and contraction on welding quality.

9. Pipes and fittings should not be moved during cooling.

1. First of all, in the process of installation, the inner wall of the electric fusion pipe fittings and the welding area can not appear organic matter or pollutants, at the same time, in the process of welding, need to keep a certain distance, so as to avoid causing unnecessary damage;

2. The field where the electric fusion pipe fittings are buried needs to be located under the permafrost. It should be noted that in the process of installation and welding, the pipe shall not be soaked in water;

3. In the harsh environment with large temperature difference between day and night, it is necessary to select centralizers and other fixed pipes in time to avoid the final welding quality being affected by the principle of thermal expansion and cold contraction;At the same time, if the temperature is particularly low, it is necessary to do a good job of insulation measures to avoid unnecessary losses;

4, the last is in the process of pipe cooling, can not be moved at will.

Weather resistance: the strength, thermal stability and elongation at break should be reduced after the pipe is exposed to the combined factors of sunlight, hot and cold, wind and rain, oxygen and other natural climatic conditions.Through the determination of bamboo weatherability, confirm that the pipe retains the performance of the raw material, and ensure that the pipe can still meet the requirements of use after receiving a certain amount of energy.

Thermal quality: confirm that the pipe retains the original performance of the raw material through the lateral determination of the thermal stability of the pipe, and ensure that the material can still meet the requirements in the construction, welding and 50a service period.